Hail Thou Lady of Air and Night, The Lord is With Thee

In the sixth month the angel Gabriel was sent by God to Nazareth in Galilee, to a young woman betrothed to a man named Joseph, of the House of David; and the young woman’s name was Lilith. The angel went in and said to her, “Hail, thou Lady of Air and Night. Rejoice, the Lord is with thee.” And she was deeply pleased by these words.

The angel said to her, “You have won God’s favor. Look, you are to conceive in your womb and bear a son, and you will name him Jesus. He will be great and will be the Son of the Most High.”

But Lilith said to the angel, “How can this be? I fear and hate children and will him them as they sleep. And I will be no one’s servant. Let it happen to someone else.”  Then the angel left her to find someone else.

In later Jewish legends, Adam had another wife prior to Eve, Lilith – created from the same dust as he. But she refused to submit to him and fled into the desert to become the Night Hag, a killer of children.
at 1:52 PM 0 comments

Nothing Much Matters after the End


The day that the end of the world began started like any other day; alarm clocks buzzed, the sun came up in the east, and men and women drank cups of coffee as they made their way to work. It was over before most of us had clocked in for the day; it was over before we even realized what had happened.

This isn’t to say that no one had anticipated the events of that morning. The members of the lunatic fringe, those of the tinfoil hat brigade had been watching the skies for decades for just this sort of thing. That guy on the History Channel, the one with the hair and the Greek name, said, “I told you it was aliens.” But by then it didn’t really matter.

At 6:45 that morning officials at NASA called for an emergency press conference to announce the arrival of several large spacecraft, alien spacecraft, approaching the Earth. With long-range radar sweeps and satellite photographs they presented overwhelming evidence that, indeed, we were about to be visited by intelligences of unknown origin. When asked, at the end of the press conference, why this information was being shared with the general public, instead of being kept secret and classified, the NASA spokeswoman said, “there’d be no point. The aliens will be visible to the general public – to anyone in the northern hemisphere with a telescope, even a cheap one, would be able to see them in a matter of hours.”

That day was spent in arguments over cubicle walls and lunch tables, on the airwaves and around government agency conference tables. How would we respond to these visitors? Did they come in peace or intend upon the destruction of the human race. Some said that we should be prepared to welcome these guests from beyond our solar system. Others argued that we need to begin readying our missile defense systems and mobilizing our military forces – immediately – before the invasion began.   Plans were drafted. Resources were mobilized. But none of it mattered. The aliens didn’t stay long enough for us to put any of our plans into effect.

Their space craft entered the atmosphere just after 9:30 AM Central Standard Time. They hovered over the Atlantic Ocean for about 20 minutes – long enough to dump something into the atmosphere. And then they left. There was no communication from them at all during that time. Nothing. They made not radio broadcast and did not respond to our frantic transmissions.

The question of motive – Why? Why did they come? – remains. Was the poison they released into the jetstream a weapon?  Or were they merely emptying the trash before they made the next leg of their intergalactic journey? Did they know that it would have a fatal effect on the human population (and on many animal species as well)? Did they care?

But that question remains unanswered. They’re gone, and do not seem to be returning any time soon. And if the death they dropped into the skies continues to kill at its present rate, there will be few, if any, who will be around to ask them should they return. Nothing much matters after the end.
at 4:26 PM 0 comments

The Crab that Ate My Father-in-Law


A monster of blind ambition
and insatiable appetite -
It came up from aphotic depths to grow, and to devour,
to consume a good man

It chewed on his throat,
and clawed at his face
leaving him blind in his left eye


I hate this movie,
and its screaming violin soundtrack. 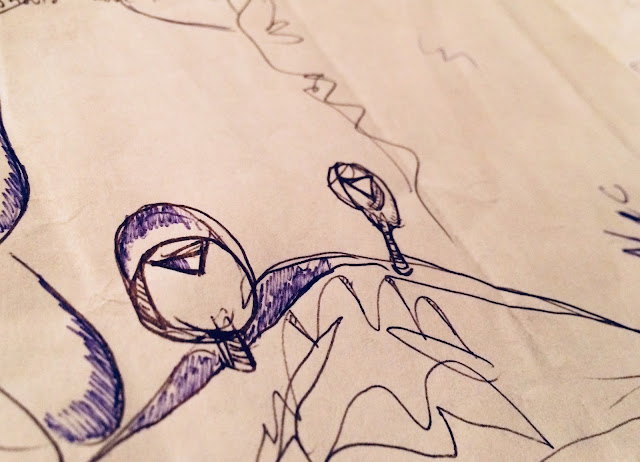 Yaw and Nothing More

Jess had been driving for hours, long hours, and the steady hum of the asphalt beneath the tires, and the endless, unchanging Midwest landscape, and the warm, stuffy air inside his late-model car with a marginally functional A/C began to lull him towards sleep, into an unblinking hypnagogic state of highway hypnosis.

He began to dream as he drove.

He dreamt of lazy summer stars falling through hazy, crepuscular skies, of chanting pilgrims in dusty robes and worn sandals on their way towards the sacred shrine of their god on the other side of the horizon, of inoperable problems, of photographic rotations and long-distance replacement parts…

…and all this was interrupted by a rumbling vibration and dull growl as he and the car drifted over onto the shoulder of the road at 80 miles per hour.

“Shit!” he shouted as he swung the wheel back to the left.

“Yaw!” squawked the blue-black raven sitting next to him in the passenger seat.

“Shit!” he shouted again. "Am I still dreaming?”

“Yaw!” the raven said again and Jess wondered if it was a response to his question.

“There’s this guy at work,” he heard himself saying to the raven, “a real anus, a whoreson if ever there was one.” The raven shifted back and forth on his thin, scraggy feet, but didn’t judge. Jess continued, “I hate that bastard.”

The raven twisted his head towards Jess. “Yaw.”

Jess sighed and then said, “If he hadn’t slept with my wife, then I wouldn’t want to kill him.”

“Yaw,” said the raven, and nothing more.