The Grasshopper and the Ants: A Flood Story

The cities of Fargo, North Dakota and Moorhead, Minnesota sit on opposite sides of the Red River; both are affected by the rising water level. Both cities have been working to prepare themselves for this event. Dikes and levees have been built, sandbags have been filled, and flood walls have been installed for a major flood event. And already the Red River has reached “Major Flood Stage” at 30.0’. This morning the river is at 31.69’ and continuing to rise. Projections from the National Weather Service and from the Corps of Engineers estimate that the river will crest somewhere between 39’ and 41’. That’s a fair flood. The record set two years ago was 40.8’. However, those estimates of 39’ – 41’ are revised estimates. Earlier forecasts put the river at 42’.

This is the third major flood event in as many years. People around here are getting pretty good at dealing with the water. As early as December of last year, plans were put into effect to prepare for the flood waters this spring.

But some have suggested that being good at this might not be such a good thing. The attitude for some seems to be “ah… we’ve had worse. The river won’t go that high this year.” It’s a feeling of complacency. City officials have spoken about “volunteer apathy.”

Not only do the cities of Fargo and Moorhead sit on opposite sides of the river, but they seem to have opposite attitudes towards flood preparation. That’s not to say that the grasshoppers in this case, have been frittering away the time instead of doing things to prepare themselves for the flood. But the ants in this case certainly seem to be urging a sense that this is, indeed, a critical event and not something to be casually dismissed.

But wouldn’t it be better to be over-prepared than to scramble in the last moments?

Take a lesson from the ants, you lazybones. Learn from their ways and become wise!
Though they have no prince or governor or ruler to make them work, they labor hard all summer, gathering food for the winter. But you, lazybones, how long will you sleep? When will you wake up? 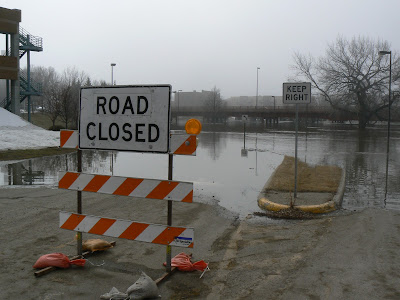 Already some streets are closed to traffic in Moorhead, MN because of the rising Red River.
at 1:39 PM