The Boring Black Belly of the Tarantula


Yes, the tarantula is a terrible insect [sic].  It has only one fatal enemy, a hymenoptera, a so-called wasp with salmon colored wings.  The wasp is always the first to attack.  Once the wasp has attacked it becomes a battle to the end.  The wasp is always the winner, you see.  The tarantula has no escape.  To finish the battle, finally, she’ll sting the tarantula.  The tarantula’s stung and paralyzed by the wasp. The wasp will then disembowel it and put her larva there, you understand?  The tarantula remains alive while the larva is nourished by its flesh.  Thus the victim can do nothing to defend itself though aware of being disemboweled and eaten alive.

I’ve been watching horror movies this month – one each day and then writing some of my thoughts to share with you.  In an earlier post I noted how European films seem better in general than American horror films.

But (and there’s always a but, right?) they can’t all be good, I suppose. 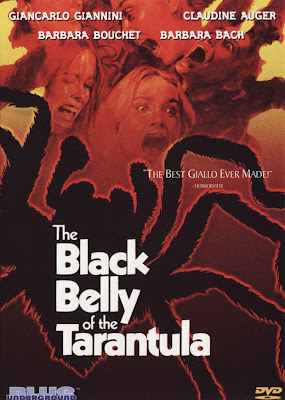 The Italian giallo film Black Belly of the Tarantula (1971) is a bit of a clunker.  There horror elements are there, certainly; the premise is particularly gruesome.  A mysterious killer is attacking women involved in a blackmail conspiracy.  He seizes his victims by paralyzing them with an acupuncture needle laced with poison and then slices open their bellies.  But Black Belly of the Tarantula never quite fulfills its potential.  It moves too slowly.

The soundtrack by Ennio Morricone is interesting, though.  It switches back and forth between an easy listening jazz and modern and disorienting horror cues. It's not as memorable as his music for The Good, the Bad, and the Ugly,  but it's pretty good.

I was bored, overall, by this movie but it did lead me to something really horrifying.

Those spider killing wasps are real.