Rocket One to Triangulum!

It took thirteen years for Voyager 2 to travel from earth to the outer reaches of our little solar system. We learned about Voyager 2 back in George Hale Jr High. Thirteen years, the entire span of my life. It took what would have been the entirety of my life to that point for that unmanned interstellar record player to travel the smallest fraction of what ROCKET TEAM ONE crossed in six short weeks. But I really don’t mean to disparage that noble craft. It was brave to set out into such huge distances even at such a slow speed. Especially at such slow speed. It was an action of hope to launch that probe into the void.

The Triangulum Galaxy is approximately 3 Million Light Years from Earth within the constellation Triangulum. It is one of the most distant objects that can be seen from Earth by the naked human eye. It was discovered in the 1600s by an Italian astronomer named Giovanni Battista Hodierna. He described it as “a cloud-like nebulosity near the Triangle on either side.” It’s a pinwheel shaped galaxy, smaller than the Milky Way.

The constellation Triangulum was mentioned in an ancient Babylonian star compendium, the MUL.APIN. The Babylonian astrologers called it the “Plough Star.” They said that the angry goddess Ishtar, spurned in her romantic and sexual advances, went to her father, Anu, to demand that he create a Bull of Heaven (Taurus) to kill the hero Gilgamesh. Anu obliged her vengeful notions and created this bull for her, and it is this bull that pulls the Plough Star across the heavens.

Why did the generals at NASA choose Triangulum as the destination? Why not something closer? Why not another solar system within our own galaxy?

According to some conspiratists on the net, that galaxy was chosen based on designs found in the hieroglyphics on the walls of the great pyramids of Giza. Triangulum – pyramids are made of triangles – the connection is obvious, right? According to these tinfoil-hatters, the central star-shaft of the great pyramid points toward the Triangulum galaxy, and that this was the home of the alien race that visited Egypt in 10,500 BC.

Crazy, right? Those shafts point towards Orion, not Triangulum. The fact that the three major pyramids at Giza replicate the position of the three stars in Orion’s Belt should have been an obvious clue that the shaft is oriented towards Orion, not Triangulum. The Great Pyramid at Giza is interesting – but not for the reasons those nutters suggest.

A similar proposition was made for the arrangement of the megaliths at Stonehenge, but there’s even less support for this crackpot theory. Still another conspiracism suggests that Triangulum was marked in top-secret star charts found in the wreckage of a crashed alien vehicle as a strategic location, both rich in resources and important in controlling interstellar movement.

Perhaps their choice of Triangulum was predicated on the fact that the largest observed black hole is found in the Triangulum galaxy. Discovered in 2007 and known as M33 X-7, this black hole has 15.7 times the mass of our sun. The military value of that black star is incalculable.

So why did they pick Triangulum? Why not something closer? Why not, perhaps, the system of seven planets found orbiting the star Trappist-1, three of which were in that “Goldilocks” habitable zone around that Red Dwarf star having the potential for liquid water – and was only 40 short light years from earth? (And 40 light years is still over 235 trillion miles…) Or any of the other hundreds of exo-planets discovered by long range telescopes? Why did they pick Triangulum as their destination of choice? Who can say? Maybe it seemed like a good idea at the time?

Dark was the night, and cold the ground
on which the Lord was laid;
His sweat like drops of blood ran down;
in agony He prayed.

“Father, remove this bitter cup,
if such Thy sacred will;
if not, content to drink it up
Thy pleasure I fulfill."

Dark and cold is the space through which the Voyager probes and ROCKET TEAM ONE traveled. Why do we venture out into such cold, dark distances? Why do we risk mortal agony and death to travel into the void? Who can say? It just seems like a good idea. We are restless wanderers, always wondering if the next stop will be better than the one before.

And we’re being told (by some of those same egghead scientists who objected to the impossibility of ROCKET TEAM ONE’s trip) that the universe is nothing more than an elaborate hologram projected into sentient consciousness by some unknown agency. If this is true then we are brains in a vat and life is but a dream, a dream within a dream. But maybe that’s why we can travel the 3 Million Light Years to Triangulum in less than six weeks – because those 3 Million Light Years are an illusion. Triangulum is an illusion. Earth is an illusion. There is nothing there. There is nothing here. There is no here nor there. It’s all Dark Energy, and we are left alone in the dark, like blind musicians to sing for hope and comfort against the terror and agony of a cold, lonely night. 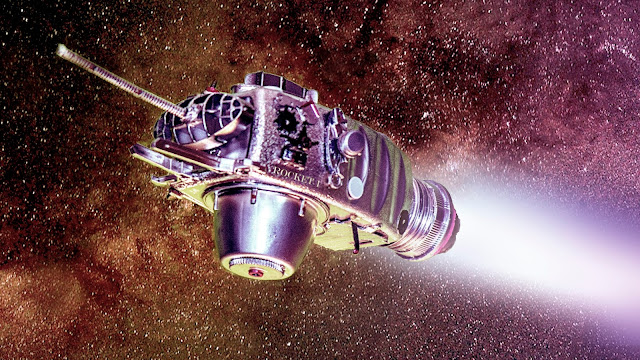