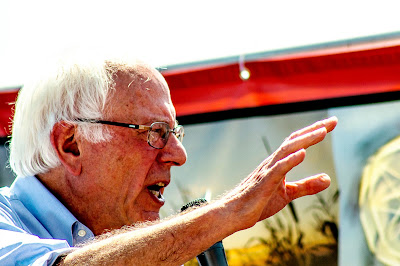 My family (those of us who are not at camp this week) went to the Iowa State Fair today. We ate fried foods, drank lots of water, saw (and smelled) farm animals, and enjoyed the day.

We saw Bernie Sanders give a soap-box speech. (I was nearly knocked to the ground by a rather large man who pushed his way through the crowd during the speech.) Apparently Hillary Clinton and Donald Trump were also at the fair today. We did not see them, though we did see Trump's helicopter circling the fair grounds. The woman standing next to me during Sanders' speech had missed her opportunity to take a selfie with Clinton. She was so excited to be standing next to her that she flubbed her her photo and missed Hilary altogether.

The State Fair can be a little overwhelming - neither I nor my teenage daughter really like crowds, so by late afternoon we were ready to just sit on a bench near the agricultural building eating some fried ice-cream.