Paul Klee: Forward and Backward to the Center


That the Swiss painter Paul Klee (1879 – 1940) isn’t more widely known and immediately recognized is somewhat shocking considering his vast output of creative work: by the time of his death he had created over 10,000 works in various mediums including: oil paint, water-color, pen and ink drawings, lithographic prints, chalk, and etc. (Baker 169) That Klee remains somewhat obscure is also puzzling when one considers his many and varied links to other popular artists within a variety of modern artistic movements of the early 20th century and his anticipation of styles taken up by artists in the late 20th and early 21st centuries. His work should be known, and loved, and treasured, not only because of his mastery of a diverse range of styles and techniques, but also because of his restless investigation into the human condition and his preservation of a childlike spirit in spite of human depravity and social crises.

Paul Klee was influenced by the artists before him and by those working around him, yet he never became inextricably linked to any particular style or artistic movement. He developed his own artistic language, borrowing and reinterpreting the styles and methods of many others, but always using them to his own design. The influence of artistic movements such as cubism, fauvism, expressionism, futurism, dada, and surrealism is easily seen in Klee’s vast output of work. He is frequently compared with Picasso, Chagall, and Mondrian, among others, but the comparison is always slight because Klee never duplicated anyone else’s stylings. Even the painting of Wassily Kandinsky, with whom he taught at the Bauhaus art school in Germany, and with whom he founded Der Blaue Reiter (The Blue Rider) group of artists, was similar but only in some small way; the differences were notable. (Ponente 16)

And if the influences on Klee’s work were many and varied, so too are the artists that his work has influenced in the years since his death and whose styles he anticipated. One can project the shimmering rectangles of color painted by Mark Rothko from Klee’s The Closet (1940, Colored paste on cardboard), and the thick-lined graffiti style figures of Keith Haring from Klee’s Project (1938, Colored paste on burlap). It can be said that, while there was little in Klee that resembled the “action paintings” of artists like Jackson Pollock, Klee’s theories and explorations set the stage for abstract expressionism. (Ponente 109 -110)

Klee’s work is often described as having a “charming innocence and freshness of outlook,” (Waldberg 52), as a “personal, fairy-tale world of fantasy and invention” (Baker 168).  But to say that his art is “childlike” is to ignore the deep maturity of his work, even in his early years. It is true that there is much whimsy and wonder in the work of Paul Klee, but there is also meditation on the fullness of the human condition, and that includes experiences of pain, and depression, and misery. In addition to his childlike playfulness his work demonstrates a “tendency to pessimism and satire” (Grohmann 11). His work is at times playful and sardonic, romantic and bizarre.

In an essay written in 1920 (while he was serving in the German army during World War I), Klee wrote, “Art does not reproduce the visible, but makes visible” (quoted in Ponente 56). His painting was more than just a replication of shapes and forms and colors from nature on canvas; it was an attempt to see into the deeper realities of the universe. 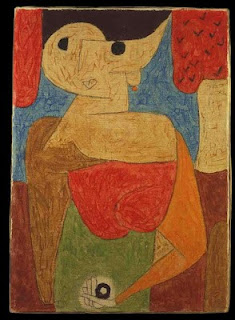 Omphalo-Centric Lecture (Paste color on silk and burlap)-created in 1939-the year before his death–is a visual description of this artistic quest; looking inward, looking deeper, looking into the mystery at the center of the universe, what lies before and what lies beyond. It is, quite literally, navel-gazing.

The mysterious figure in Klee’s painting stares out at us, as if inviting us to join the artist in this quest to find the center of all things. She (the figure is vaguely feminine in its curves) cups in her hand a glowing navel, radiating with a sort of divine light – a light from which all knowledge spreads.

For Klee, who suffered in the last years of his life from scleroderma (an autoimmune tissue disorder that causes a thickening and hardening of the skin and of blood vessels and internal organs) the Omphalo (Greek for “navel”) was a symbol of life and death. He dealt continually with images of life as well as images of fear and death in his last years-not just his own personal fears and his own imminent death, but those of the world around him as well. 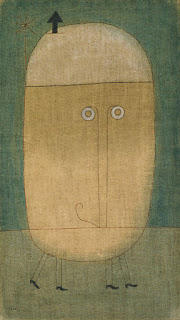 The Mask of Fear (oil on burlap, 1932) is a painting that describes the mental anguish of the artist and of the world. The oval shaped, somewhat African styled mask has large, round eyes with widely dilated pupils-as if starring, transfixed in horror, at something unseen-over a quirky, thin handlebar mustache. Painted on the eve of Adolf Hitler’s rise to power, it’s not difficult to guess what horror that might be. The satirical death mask is supported on two sets of human legs-suggesting that this fear of death is corporate, rather than individual. “The Mask of Fear, then, is a mask of anguish covering the face of Europe, whose myth was again collapsing” (Ponente 97).

In 1933 Klee and his wife fled from Germany, back to his native Switzerland, to escape persecution from the Nazi party. Klee, along with many other modern artists in Germany, was labeled a “degenerate” artists by the Nazis, and accused of being a “Jew” and a “foreigner.” (Grohmann 31) But, he said, “It seems to me unworthy to answer back to such crude taunts. Even if it were true that I am a Jew or that I come from Galicia, this would not change by one iota the value of my personality or my achievement” (Letter dated April 6th, 1933-quoted in Grohman 31).

Despite the horrors of war, the death of close friends, and the pain of his illness, Klee did not consider death to be the end. The epithet on his tombstone (which he composed himself) reads: 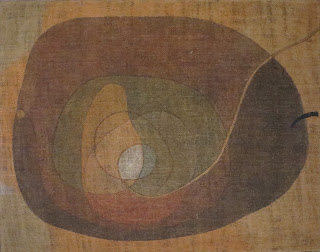 And his work continued to demonstrate a combination of mature reflections on pain and sadness, as well as the mystery of wonder and joy in the world. Klee returned again and again to the Opmphalo as a sort of reoccurring image of life and wonder in his work.  In 1932, he painted The Fruit (oil on jute), another example of his quest to find the mystic center. In that work, a spiraling cord–an umbilical cord–leads us forward and backward, curving through space and time, to find the intense white light at the center of a dark piece of fruit– the seed, the embryo from which all will grow. 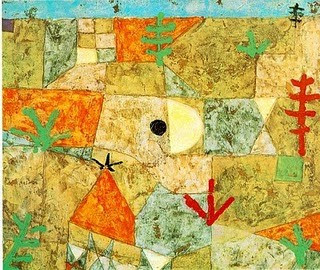 In 1936, he painted the cheerful landscape Southern Gardens (Oil on paper). Klee painted few works that year because of the debilitating pain of his illness, yet despite his sickness, this work is filled with a joyous light and warmth. It depicts a serene Mediterranean landscape–a garden. And, again, in the center of this garden is the Omphalo. The Garden becomes then, not just any garden, but the mythic and mystic Garden of Eden where men and women walked with God in the cool of the day (Genesis 3:8)-close to the heart of creation.

It is this combination of pessimism and satire with charming innocence and whimsy, of the realities of pain with the joy of existence that draws me into the artwork of Paul Klee and makes me wish that more people were familiar with his work.  “I don’t want to render man as he is” said Klee in one of his lectures, “but as he might be” (January 26, 1924, quoted in Poente 14).  Through the artistic work of Paul Klee it is possible to discover the fullness of the human experience and to search for the greater mysteries-to become more than we are.